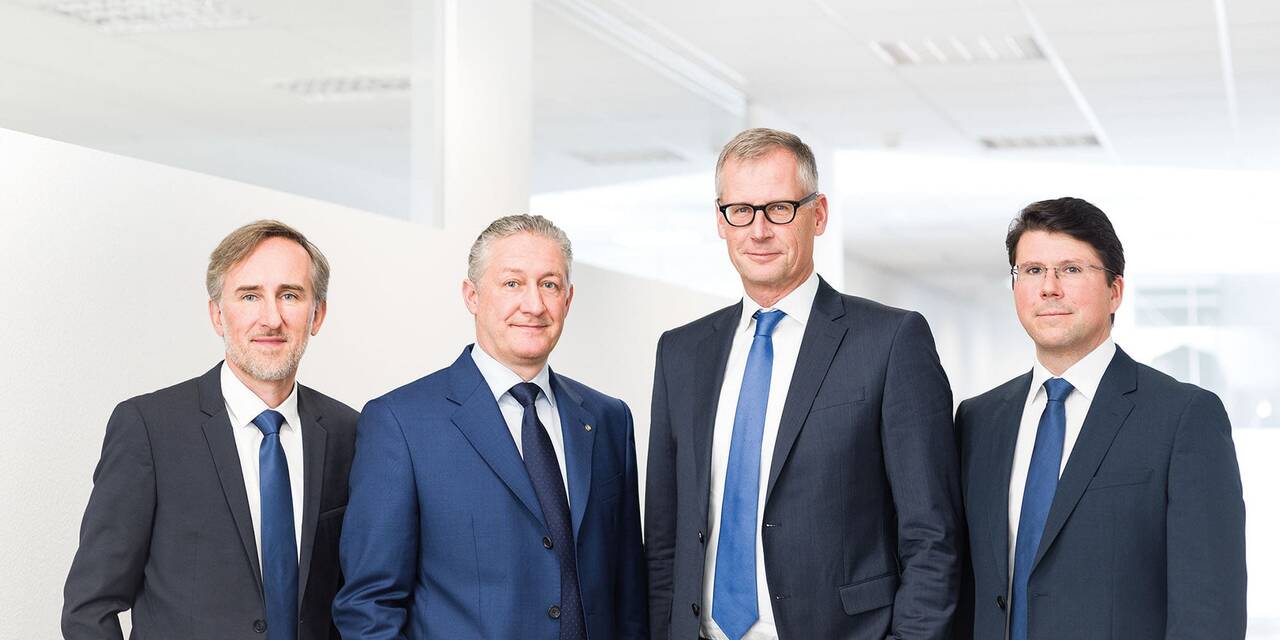 The Executive Board of Wirthwein AG will be reconstituted as of January 1, 2022. From left: Thomas Kraus (Sales), Marcus Wirthwein (Spokesman), Holm Riepenhausen (Technology) and Dr. Ralf Zander (Finances).

Review of this Year and Outlook for 2022

Thomas Kraus was born in Inzell in the Chiemgau Alps and is a graduate engineer (FH) in the field of plastics technology. For more than 20 years, Thomas Kraus has been responsible for various international management and sales functions in the supplier industry for passenger cars, commercial vehicles, ships, rail and air transport.

The Supervisory Board, consisting of Chairman Udo Wirthwein, his deputy Edmund Brenner, and the other members Ingrid Wirthwein and Winfried Seitz, appreciates the excellent cooperation within the Executive Board and expressed their thanks to the Executive Board members at the end of the year 2021 for their high level of commitment in difficult times. The Supervisory Board is also convinced that Wirthwein AG has succeeded in filling the position of Chief Sales Officer with Thomas Kraus and is looking forward to working with the new Executive Board.

Review of a turbulent year 2021

The industry faced a turbulent year in 2021 due to the impact of the corona pandemic on global supply chains. Freight costs for container shipments have exploded. Since the beginning of the year, wood, steel and plastics have only been available on the world markets – if at all – at extremely high prices. Wirthwein, too, has been fighting for raw materials at the international plants for months. The current global chip shortage is having a serious impact on the automotive industry, but is also affecting the home appliance and electrical industries and thus also very significantly the sectors for which Wirthwein is producing. Despite full order books, several customers had to reduce production, which also led to a reduction in the number of units produced by Wirthwein. This meant short-time working at some locations again.

Fortunately, Wirthwein had a strong first half year in the automotive and home appliances business areas, so that the group of companies should achieve its target at the end of the year despite the chip crisis. In the medical technology business area, growth and expansion of automation, efficiency enhancement and digitization were implemented as planned. In the rail sector, Wirthwein's business performance was unsatisfactory due to skyrocketing raw material prices. Interior design again proved to be stable. However, there were and still are considerable delays on construction sites due to the shortage of materials for preliminary trades, which meant that the group company Winkler Design also had to postpone assembly deadlines time and again.

However, thanks to the strong diversification and long-standing business partnerships, the Wirthwein-Group has also been able to take advantage of the opportunities presented by the crisis. The most visible sign of this is probably the new production hall built this year at the headquarters in Creglingen. However, investments were also made in new clean rooms, production cells, machines, systems and associated equipment. In 2021, the interior design subsidiary Winkler Design GmbH & Co. KG celebrated its remarkable 100th company anniversary, while the medical technology expert Wirthwein Medical GmbH & Co. KG looks back on 75 years of successful development, and the plant in Brandenburg started business exactly 30 years ago. At the plant in Crimmitschau, Saxony, numerous restructuring measures were implemented. In China, the Wirthwein subsidiary "Shenyang Wirthwein Technology Co., Ltd." successfully moved within a short time. Marcus Wirthwein says: “We could attract interesting new customers and orders again. At the Nauen plant, for example, we are going to manufacture system components for a future-oriented automotive manufacturer that promises great potential for the region.”

At the plant in Łódź, Poland, Wirthwein will establish a third production facility and create new jobs there, too. A fourth subsidiary is currently being established in China, which will manufacture for the long-standing customer in the electrical industry business segment. The fourth subsidiary in "The Middle Kingdom" will be built in the provincial capital and metropolis of Xi'an. A major order from an automotive customer has been placed in combination for the plants in Fountain Inn in South Carolina, USA and Shenyang in North-Eastern China and for production in South Africa. For this reason, Wirthwein will manufacture with a partner in the Pretoria region from fall 2024. The plastics expert Wirthwein sees exciting challenges and interesting potential in the step onto the African continent.

To reflect this internationalization in the name as well, there will be another change in the new year 2022: Wirthwein Aktiengesellschaft will be transformed into "Wirthwein SE". The European legal form "Societas Europaea" corresponds to the German stock corporation in many areas. ”In this way, we are also outwardly expressing our self-image as a company with a worldwide orientation that is striving for international growth“, resumes Marcus Wirthwein, who is looking forward to the upcoming tasks with the newly composed Executive Board.